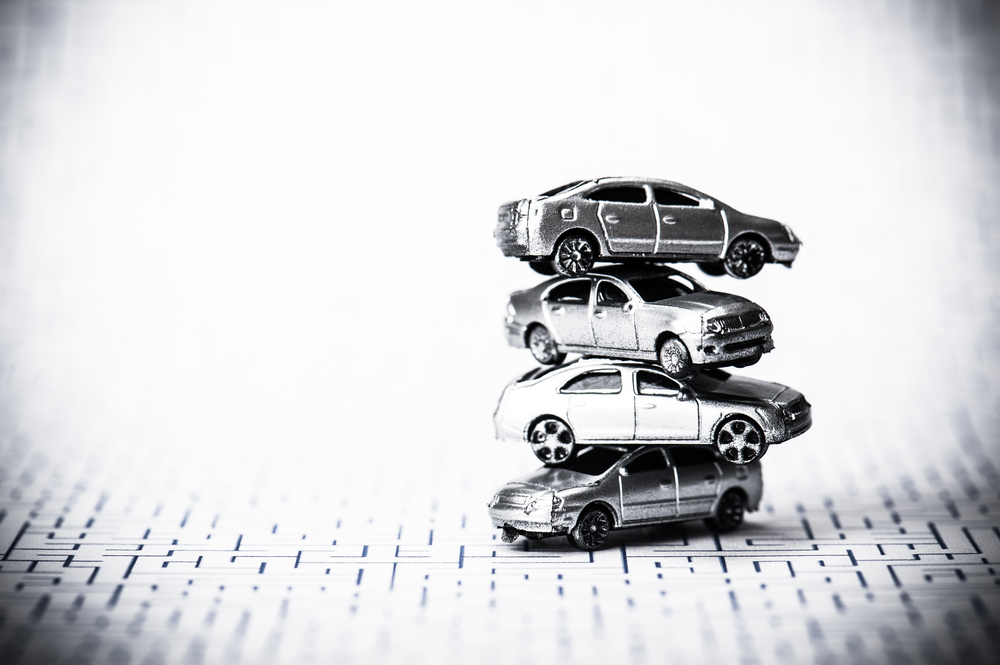 Vehicle recalls aren’t anything new for the auto industry. They’re an (almost) everyday occurrence. Some 44,000 vehicles were recalled in the UK by 12 different manufacturers in March alone, including Audi, Ford, Nissan and Jaguar. But sometimes a recall can hit a particular nerve with the public and cause significant damage to reputation.

Early this year, BBC News detailed the findings of an inquest holding German automotive company BMW to account when UK driver, Narayan Gurung swerved his vehicle to avoid a stalled BMW in the road and died at the scene. The stalled car had a complete electrical failure, so Mr Gurung was unable to see it on the road as no emergency lights were on.

The incident occurred in 2016, and numerous reports have since highlighted how BMW had failed to notify the DVSA (Driver and Vehicles Standards Agency) of the potential fault and safety issue posed by some model vehicles. Findings surfaced that BMW knew about the fault in 2011 - some 5 years before the crash. Questions were asked over why UK models weren’t recalled sooner.

The issue is ongoing for BMW as it has recently expanded the original safety recall following the Gurung inquest and widely publicised reports from BBC’s Watchdog - affecting more than 300,000 vehicles in the UK.

For the automotive industry, this issue joins a long list of public concerns that every company should be actively monitoring. Consumer trust in the safety and environmental impact of their vehicles has been shaken.

The industry is still reeling from Volkswagen’s emissions scandal (which caused Volkswagen shares to drop 20%). Any similar issue now attracts obvious comparisons and hits on a public sore point—most recently seen as BMW phobia gathers pace on social media following the aftermath of a mass recall of South Korean BMWs earlier this year.

A contributing factor in BMW’s seeming inaction around the electrical failure problem was that consumer feedback only came through its authorised network. If a customer experiencing problems visited a garage outside of the network, BMW wouldn’t have the full picture of the defect.

The company admitted in its Government inquiry that this led it to mistakenly think the issue wasn’t as widespread and that it was not monitoring the rampant discussion across social media to cover these blind spots.

Off the back of the Gurung accident, BMW faced increasing challenges as media scrutiny intensified around a few critical issues— such as a growing emissions scandal that created consistent negative sentiment.

In April 2018, BMW faced criticism over its environmental responsibility due to a scandal involving ‘defeat devices’ in some of its diesel vehicles. This draws parallels with Volkswagen’s emissions scandal, something that had a huge negative impact on the wider industry’s reputation. 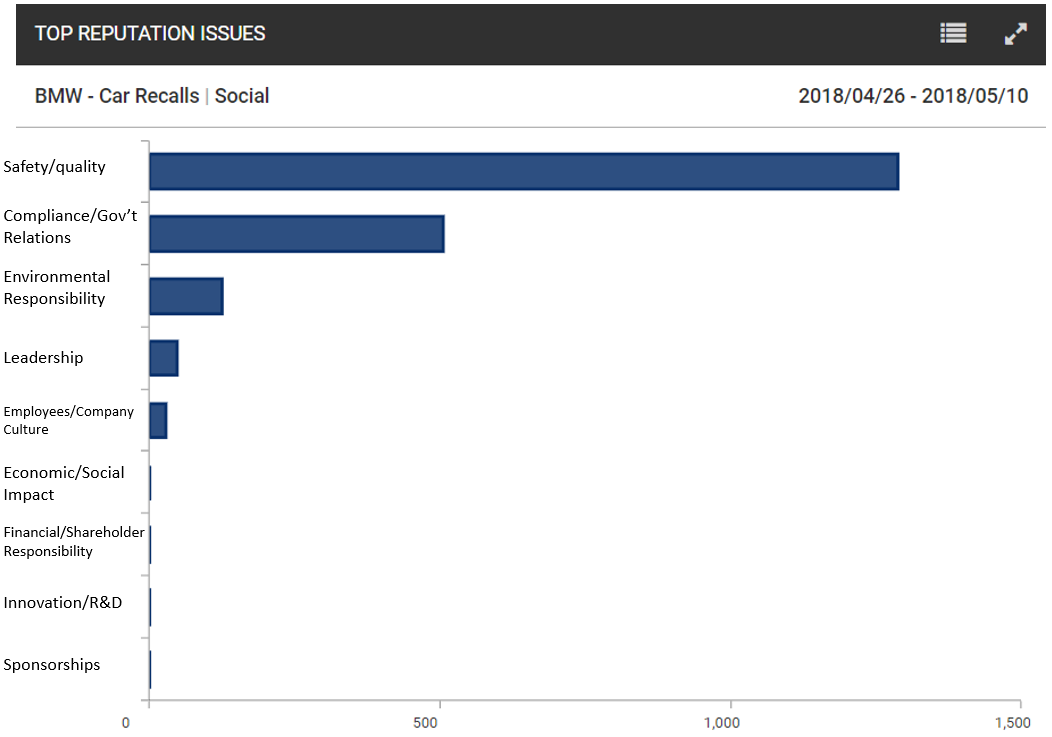 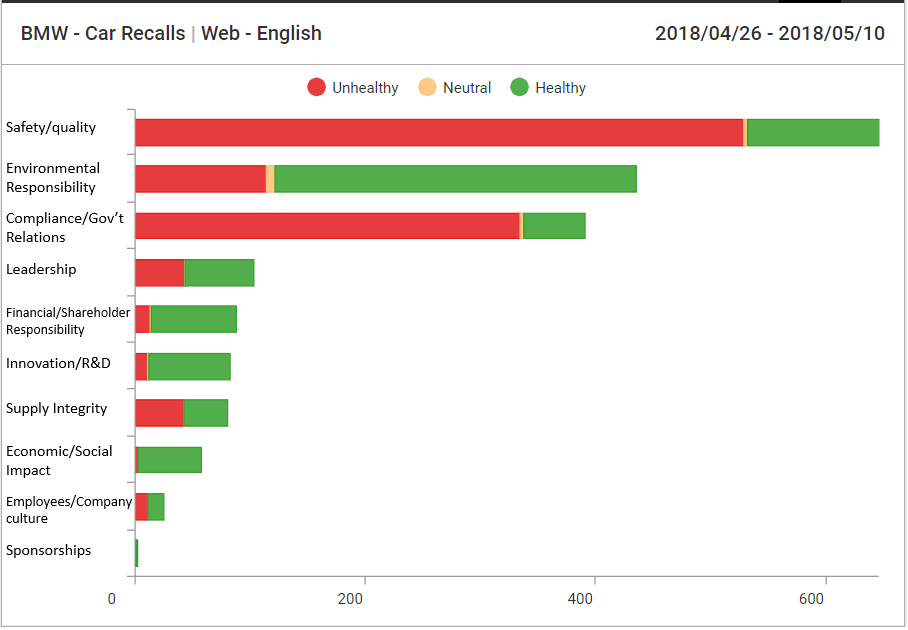 Safety/quality is the biggest driver of BMW’s reputation on social media from April 26 to May 10, 2018 (Top) due to the ‘defeat device’ scandal. These conversations are driven primarily by negative sentiment (bottom) [Source - Polecat, 2018].

The industry must address customer concerns quickly, especially when dealing with environmental or safety issues, to stop problems gaining momentum and headlines. Responses are particularly urgent given that scandals often spread rapidly on social media, and need to be monitored 24/7 - with the right technology to provide real-time alerts and intelligence that can drive action.

Wider stakeholder conversations can also be tracked. The only way to get-ahead of a discussion is through understanding what industry bodies, regulators, investors and the public are saying.

The Ford and Firestone recalls of the early 2000s demonstrate the potential fallout of poor monitoring. US congressional hearings heard from both manufacturer and supplier, where both blamed each other over the mass incidence of faulty tires leading to vehicle roll-over deaths. Ultimately, they did not act sooner because both companies were “immersed in a sea of data” that neither had ownership of or accuracy in reporting - until it was too late.

While lawmakers can take measures to protect the public in the aftermath of such tragedy, it seems that greater clarity over data collection, organisation and analysis can help drive positive action. For automotive manufacturers, consumers and society.

Importantly, there must be a heavier reliance on accurate and real-time data tracking, response times and actions to take. With greater clarity on the entire conversation taking place around scandals, car manufacturers dealing with vehicle recalls now have the ability to track and respond to early warning signals of impending crisis.